If you hear a very loud BONK!!! don't be afraid, Bellbirds are hanging around!!

The Cotinga family is represented by about 67 species distributed throughout Central and South America, including bellbirds. Four species of bellbirds have been described and they all are classified into the genus Procnias.

The Three-wattled Bellbird (Procnias tricarunculatus) is found in tropical forests between Honduras and Panama, making it an endemic species of Central America.

Every year, between February and September, one can find Three-wattle Bellbirds in the middle elevations of mountain ranges around Costa Rica. So, lets talk about this amazing bird!!

They have very remarkable sexual dimorphism: males are chestnut-colored with a snowy head and three wattles- one hanging from each corner of the bill, and another dangling from the bill´s upper base. Females are a drab olive with a black-streaked breast, lacking wattles. Ok, now we know what males and females look like, so what about juveniles? If it is a male, a juvenile will look just like a female, except they do have the characteristic wattles around the bill! So, now that we know how to tell males and females apart, lets continue talking about the bellbird´s natural history. 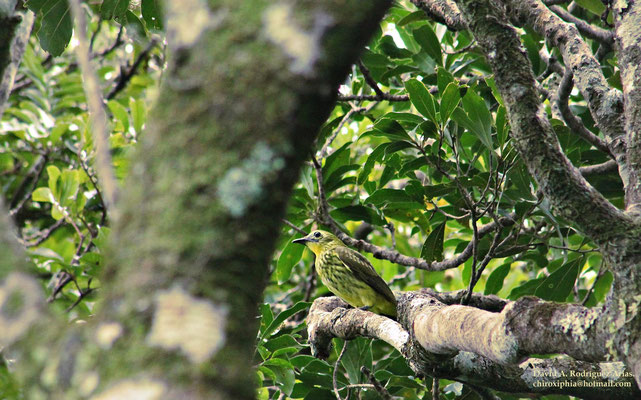 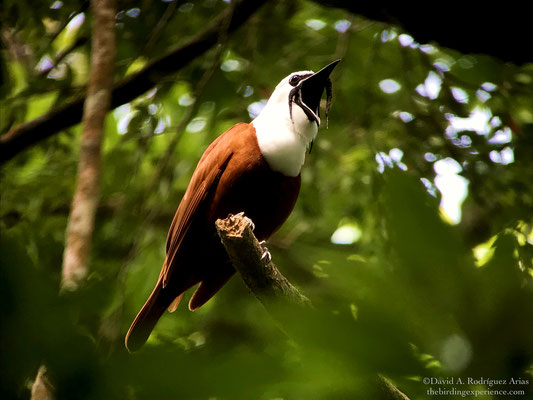 To begin with perhaps the most interesting part, there is no complete nest described for this species. Why no complete nest? Well, there has only been one nest sighting recorded so far in the entire world, and it was attacked by a predator. So, we are still looking for an intact nest.

It takes a juvenile male around 7 years to obtain adult plumage, so as they are grow, the coloration of the feathers changes little by little. But it is not just their plumage that changes, so does their voice! Bellbirds get their name from the loud, characteristic calls the males make. In the case of Three-wattled Bellbirds, the Tilaran dialect sounds like a series of three whistles followed by a loud, high-pitched BONK. When a juvenile is singing, it sounds more like a teenager- the whistles waver in pitch and the bonk sometimes lacks oomph. To produce the adult sound, the immature males have to spend time in the presence of adult males, practicing and learning from them. Once they have their adult plumage and call, they are able to attract females and defend lek sites.

The lek is all about trying to impress: sometimes it is possible to find more than two males on a single bare branch above the canopy of the forest.  A male can open its beak almost 180 degrees, which is a common behavior during lekking. While sharing the bare branch, one male chases the another one, opening its bill and pushing its body against the other male until it reaches the end of the branch. At that moment, the chased bird jumps back on the branch and starts exhibiting the same behavior towards the other bird, becoming the chaser.

Three-wattled Bellbirds have the loudest call of any species of bird recorded in the world. There are three geographically distinct dialects. From north to south, they are the Nicaragua, Monteverde, and Talamanca dialects, which brings us to a new topic: bilingual birds. The Three-wattled Bellbird has the ability to learn more than one dialect. Thats allow us to find individuals who call with both the Monteverde and the Talamanca dialect.

Another fact about the Three-wattled Bellbird is that they are altitudinal migrants. In one study, researchers found that Three-wattled Bellbirds migrate from Monteverde to South Nicaragua, then move to Western Panama, and finally come through the Pacific side of Costa Rica to reach Monteverde once again. The same researchers found that a male bellbird can live as long as 21 years.

Ok, but why is the Three-Wattled Bellbird an important species? Because they eat fruit from a huge variety of tree species, they are important seed dispersers. This ecological role is vital to the health of tropical forests and helps maintain forest structure and diversity.